I have been wary of Western Buddhism as a sort of neo-Deism: a religious faith, if it may be called that ("Buddhism is not a creed. It is a doubt."--G.K. Chesterton: Chesterton could also have said, "Buddhism is not a Creed. It is a Dao."), where in its native element the ethical heavy lifting is done primarily by what a Western scholar might call a system of virtues, and there are fewer inviolable rules, while the Western self-identified Buddhist picks up on the fewer inviolable rules but does not do heavy lifting by its Path of eight cardinal interlocking virtues.

Nonetheless, a visit to Buddhism can be helpful in another aspect. Buddhism is arguably a stronger grade of skepticism than is prominent in the West ("Buddhism is not a creed. It is a doubt."—G.K. Chesterton), but when the Buddha's followers asked him if there were gods, he said that there probably were, but the question was irrelevant, because any [good] deity would have already blessed us to the maximum extent possible.

My first response, on hearing that answer repeated decades ago, was, "Well, that rules out the Christian God very quickly." My thought there was that the great skeptic's answer did not entertain a correlation between being blessed by Deity and one's relationship with Deity. The Christian God, said in the Sermon on the Mount to make his sun shine on good men and evil men alike, has something beyond desire to bless us to the maximum extent possible, but for how well the blessing works for us, it matters whether we cooperate with the blessing or resist it. The Great Physician wants to give us the supreme Medicine, but it matters a great deal for us whether we take the Medicine as directed or throw the Medicine on the ground and spit on it. A Russian philosopher has been asked that perennial question, "Could God make a stone He could not move?" and answered, "Yes; that stone is man."

None the less, I have been having a struggle with something I should know better than, thirsting for worldly honors. Or, to be more precise, a mad thirst for more earthly honors when I have had enough honor that I should know that worldly honors do not satisfy or make lastingly happy. One thought that was in my conscience was, "What would St. John Chrysostom say?" And without thinking of exact words, I knew what kind of response he would give: a good dose of clear thinking that would paint black as black and white as white. I thought of gratitude for what I have been given--and a next life in which God offers honors such as eye has not seen and ear has not heard. I did not think of it at the time, but also relevant is a post I wrote when I tried and failed to locate a copy of St. John's "A Comparison Between the Monk and the King:" A Comparison Between the Mere Monk and the Highest Bishop. Or, as the Holy Cross Hermitage's ever-kind guestmaster condensed the entire topic, "Bishops want to be novices!" Wherefore, being a novice myself, I should recognize the privileged position I already hold, and be grateful for the crown assigned to my role as a novice, rather than hanker after the half-eggcupfull of external glory that is assigned to bishops but is withheld from novices. (I also did not think of being one of half a dozen at a monastery which has the artisan's attention of an esteemed bishop. Perhaps it is glorious to give communion, such as my Abott gives, but the glory is dwarfed by the glory of receiving communion, a glory shared between Abbot and novice alike. (And by the way, my Abbot is a high rank of bishop, but he usually doesn't wear the crowns he is entitled to wear. He seems to leave wearing crowns to the novices.)

I fought against this mad thirst for a while and was losing despite my best efforts, perhaps a cue to the wise that what I was fighting was not some confused logic but a temptation and a sin to be repented of, and found a familiar enough foul stench in that my thoughts of being happy through external honors was not making me happy, but sad.

And when I had struggled enough, salvation came. It came not from recognizing the particular privilege of a novice, in learning the freedom that is in obedience to an Abbot, and of being entrusted a yoke that is easy and a burden that is light when more privileged roles bear a heavier cross. Salvation came, this time, in a visit from the Buddha, so to speak. And this even apart from what the Buddha had to say about desire.

I would not retract any of my earlier thoughts about "Well, that rules out the Christian God," but casts a particular light on the Providence of God, but this visit from the Buddha showed that there is something of the Providence in the idea that deity, if such exists, will already have blessed us to the maximum extent possible. C.S. Lewis said, "We want God to change our circumstances. God wants our circumstances to change us." And furthermore this combines in an odd way with the Christian God whose Grace can bring Heaven everywhere, but we can if we want veto enjoying Grace and instead experience it as Hell. The point of this visit from Buddhism is not really a point about the Grace available in my own particular circumstances, but about all circumstances in general, or rather a point about every particular circumstance. Until we have grown enough, and perhaps even then, the demons tempt us to ungratitude towards circumstances in which God has already blessed to the maximum effect possible, save our accepting and realizing His Providence as the Maximum Providence of God the Spiritual Father, of a God who cares for each of us more than an a mortal spiritual father takes care for his charges, of a God who however much our Plan A fails, and then Plan B, and Plan C, and so on down the alphabet, remains a God who is always dealing with us on Plan A. It can be easier to see this Providence years after the fact, to realize what painful circumstances gave you and what God saved you from by taking away what you wanted to pray for. And with effort, God can help us realize his Plan A for us where we are here and now. But the temptation is just that: a temptation, a hook of Hell designed to take away as much as possible our happiness in circumstances in which God has blessed us to the maximum extent possible save possibly our consent, and is building here on earth the foundation and substance of an eternal glory.

And really, what had brought on this temptation, or rather immediately triggered it in my immaturity, was one of the magazines freely given our Abbot, a magazine offering trite coverage of an English Princess, who said, "Someday I will be Queen," "is 7 but thinks she is 17," and "speaks four languages," "is at the head of her class," and something about being a style icon. I would briefly comment on what I was coveting in her royal privilege:

"Someday I will be Queen!"

Before and also now, I consider bare membership among the faithful of the Orthodox Church to outclass primacy in the Church of England.

And I am trying to cooperate with God in reaching Heaven, in glory so great that we are advised not to think too much of our glorified state. And, further, I recall St. Rostislav: "I have heard of how Constantine, great among kings, appeared to a certain Elder and said, 'If I had known what glory the monks receive in heaven... I would have taken off my crown and royal purple, and replaced them with the monastic garb'."

One person at the Mars Society talked about asking people, "Who was the Queen of Spain in 1492?" The answer comes quick as a shot: "Isabella." Then the next question is posed, "Who was the Queen of France?" And to that I will add that armchair historian as I am, I do not know who was King of England in the days of C.S. Lewis.

I'm also too big for my britches.

Is at the head of her class:

One psychologist drew a sharp point of, "The average Harvard PhD has never met someone as talented as you," and I have been in the dubious honor of being so far ahead of what professors were used to that their social skills started to melt away.

Something about being a style icon.

I'm not sure that ever, in my entire life, have other people looked at what I was wearing to take cues for style. People have borrowed a T-shirt for me as an emblem of bad dressing.

But I somehow seem to end up going ahead of the Zeitgeist, whether or not I have the faintest desire to do so.

The overall predicament I was in reminds me when I was traveling through a hardware store coveting ordinary Swiss Army Knives while looking for an impossible-to-find wiresaw a friend wanted: 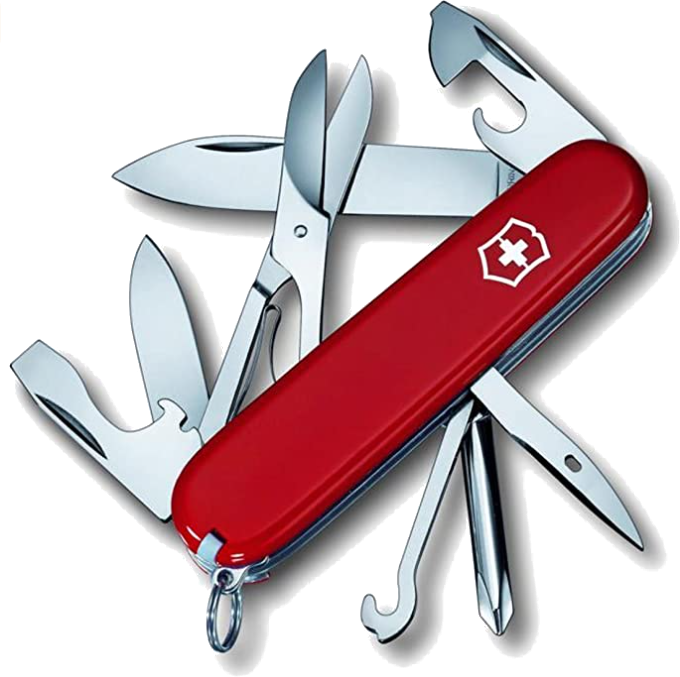 When I had a SwissChamp XLT on my belt: 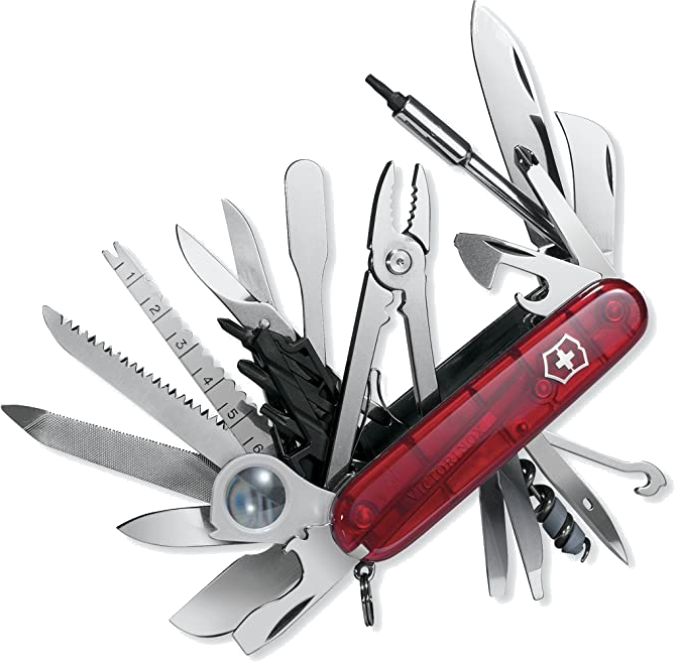 There was something profoundly stupid in my coveting earthly honors, and that something would have remained stupid even without the irony, like the pears passage of the Blessed Augustine, of owning pears better than anything he coveted enough to steal.

In Exotic Golden Ages and Harmony with Nature: Anatomy of a Passion, I wrote:

Adam reigned as an immortal king and lord over the whole world. He had a wife like nothing else in all Creation, paradise for a home, and harmony with nature such as we could not dream of. And, he was like a little boy with a whole room full of toys who is miserable because he wants another toy and his parents said "No." And lest we look down on Adam, we should remember that I am Adam, and you are Adam.

And the content of such temptations is stupid: stupidity and something that backfires if we entertain them even just a little... but there is something to be said for temptations in God's Plan A.

Everything that God allows in our lives is either a blessing from God or a temptation which He has allowed for our strengthening.

God allowed me a miserable few hours coveting privilege that I might be strengthened, and even if things would have been much easier if I had not entertained the desire, he allowed me the temptation for my strengthening and harvested my sin that I might strike at the sin all the louder.