I would like to begin a discussion with reference to things tinged with the occult by asking a question: "Is life empty or full?"

Is Gnosticism empty or full?

I write this because (Note: "sexy" content warning) Protestant author's Philip Lee's Against the Protestant Gnostics says that Gnosticism defies historic analysis because it is not a historical phenomenon (I would suggest that a history of Gnosticism would be a bit like a history of the process of untreated cancer), and it equally defies philosophical analysis because it does not approach the status of a consistent philosophy. Having thus rejected the two standard academic ways of knowing, he said that Gnosticism hinges on a mood of despair.

The good news of Gnostic escape is good news only if life is empty. It holds all the appeal chewing off a limb does to an animal caught in a trap.

In between those poles, people may be significantly happy but still find Harry Potter enticing. However, let's look at archetypal poles.

Gnosticism is like spiritual pornography or crack cocaine: it seems to sparkle with joy but gives less and less, and creates more and more misery. And it is the disenchantment of the entire universe: first it disenchants and destroys the ability to enjoy anything else, then it disenchants and destroys the ability to enjoy even itself. Or as St. Basil said of merely fleshly lust, lust is like a dog licking a saw: it tastes pleasure [and there is a feedback loop, but the pleasure it brings is the pleasure of its own increasing woundedness. This is writ large in the spiritual lust that Gnosticism and its kin inflict. Gnosticism is a recipe for unhappy people to become much more unhappy.

I have been afraid to let go in the unconditional surrender of repentance, then when I have let go, I realized, "I was holding on to a piece of Hell!" (In the Philokalia it is said that people hold on to sin because they falsely believe it adorns them.)

The cup is full 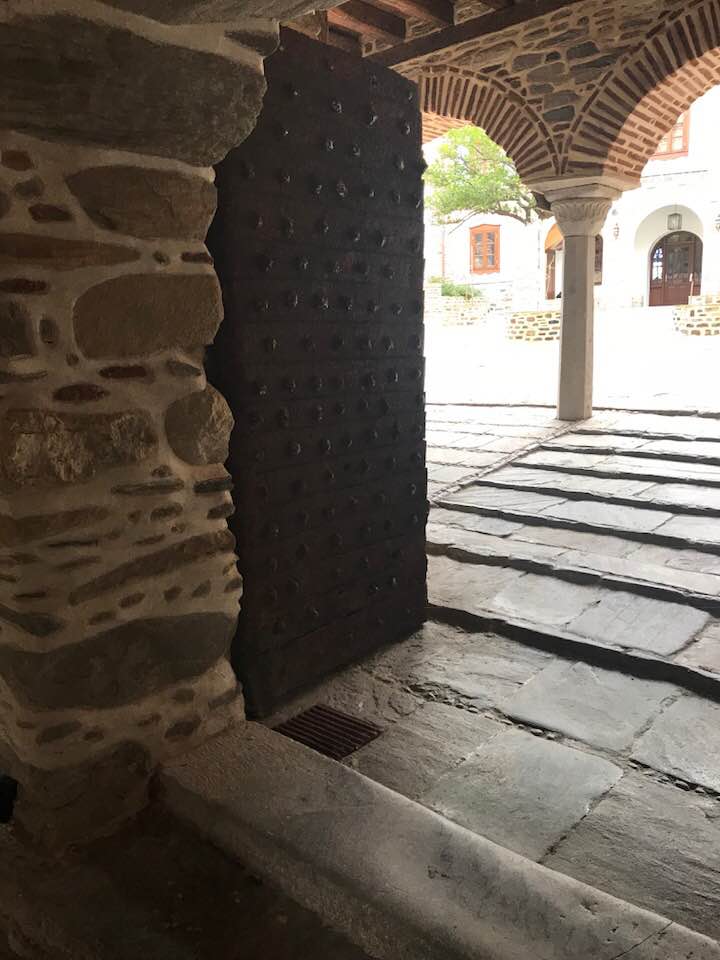 I ask because among Protestants, and for that matter Orthodox, I do not remember hearing people speak of "this good world." Inevitably, I have only heard people speak of "this fallen world." Even the great G.K. Chesterton, whose writing opens eyes to all sorts of good things, says that the Fall is the one Christian dogma that can be empirically verified. Is the Fall really more important than that the world exists created by God? As an old hymn says, trying to be God, Adam failed to be God; God became man, to make Adam God. Each one of us is the chief of sinners, but does this outweigh that Christ died for each one of us? Is it not true that beauty is forged in the eye of the Beholder?

As at least one priest I know has insisted, at great length, that everything that comes to us is either a blessing from God, or a temptation which has been allowed for our strengthening (temptation in Orthodoxy means both a provocation or enticement to sin, and a trial or difficult situation, and the two are not really that different).

And this world we are in is created by God as good. Occult religion today is often themed to appear as a nature religion, but the occult enterprise relates to both nature itself, and the protecting veils built in to nature, as vile and repugnant. That is still true if your approach to insider trading and overriding nature and its limits is primarily based on what you do with plants. And by the way, unnatural vice is in patristic usage an umbrella term that covers a whole lot more than just gay sexuality. Unnatural vice also includes contraception... and by the way it also includes the occult. To the best of my knowledge, every ancient heresy that was occult and escapist, such as Manicheanism, Docetism, or a million Gnosticisms, said that matter was evil. And really, it's hard to seek occult escape if you snuggle into God's creation like a warm blanket.

The belief that God created Creation as good means, among other things, that Creation itself is something like a warm blanket. It means, if I may say so, that if you are in communion with the Orthodox Church, you are not only in communion with living men; you are in communion with Christ and his Mother, but ultimately the whole of Creation, the sky and stars and seas, and even in a certain sense more in communion with heterodox than heterodox are with themselves. Patristic writing contains innumerable warnings about the world and even pampering our bodies, but writers occasionally make one thing clear: the term "world" refers to our passions (in Protestant terms, our state of sin), and here (most of) the problem really is in the eye of the beholder.

During my time in England in particular, I remember knowing I was unhappy, but preferring to be unhappy in Europe rather than something I did not have then, being happy in America. But God has worked with me ever so patiently, and during the more recent times in my life, I have had genuine, long-term happiness.

I am happy now, and it did not really perturb me that I was not able to stay on a pilgrimage to Mount Athos but had to return to the U.S. even though I had come to the Holy Mountain with a blessing to stay. 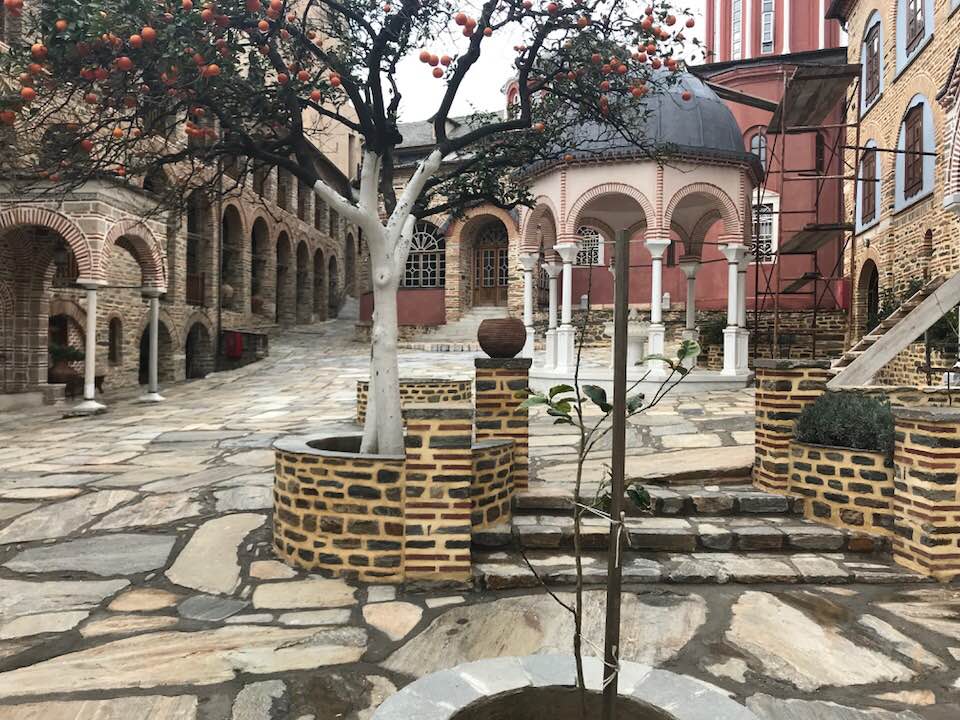 When I traveled to Mount Athos, I texted the above picture to immediate family members, and said, "This is better than Dungeons & Dragons," and meant every word. But not because the picture was breathtakingly beautiful, in an Old World fashion: I mean it just as much here, in America, without escape.

Perhaps what I can offer is this: I have sold or tried to sell role playing as a child's make-believe practiced as an adult. To that characterization I would say, "Yes; but what is appropriate in childhood is not always present as an adult." I have not heard of a young child needing dice to make believe.

What I have experienced as the foundation to role playing games is vicarious living through a character. You pretend to be someone else, somewhere else.

That lands us in escapist territory, even if the degree of escape is limited.

And let me be clear: I know the demon personally.

Overall the effect of such seizing vicarious control is to close a person up rather than open the person up, on which point I would quote the poem, Open:

How shall I be open to thee,
O Lord who is forever open to me?
Incessantly I seek to clench with tight fist,
Such joy as thou gavest mine open hand.
Why do I consider thy providence,
A light thing, and of light repute,
Next to the grandeur I imagine?
Why spurn I such grandeur as prayed,
Not my will but thine be done,
Such as taught us to pray,
Hallowed be thy name,
Thy kingdom come:
Thy will be done?
Why be I so tight and constricted,
Why must clay shy back,
From the potter's hand,
Who glorifieth clay better,
Than clay knoweth glory to seek?
Why am I such a small man?
Why do I refuse the joy you give?
Or, indeed, must I?

And yet I know,
Thou, the Theotokos, the saints,
Forever welcome me with open hearts,
And the oil of their gladness,
Loosens my fist,
Little by little.

God, why is my fist tightened on openness,
When thou openest in me?

In the Dungeons & Dragons I played, there was surrogate battle with monsters, governed by rules and an algorithm that humans could follow. On the Holy Mountain, there was real battle with monsters: the demons, or devils, or dragons. Victory in surrogate battles with dragons was always smaller, and of less than human stature. Victory in real battles with the serpent genuinely left me stronger. In I rejected and broke free of manacles that had shackled me for ages. Everything that happens to us is either a blessing from God, or a temptation which has been allowed for our suffering. In Dungeons & Dragons terms, I made level and came back in joy and triumph.

And by the way, do not be surprised if I assert that demons and their attacks are with us incessantly: that may not be how today's secular psychology understands things but that is how the Fathers understands things: but it is how unseen warfare is waged in the Philokalia, an anthology which has more information on the activities and operation of demons than I have seen in any other source.